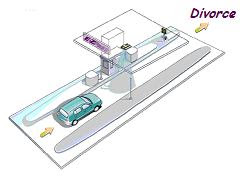 If you're considering being unfaithful, just make sure your car isn't equipped with an electronic toll collection system. In the northeastern United States, the lies of adulterers as to their whereabouts have been exposed by the records of one such system, E-ZPass, as reported in the Guardian: "Lynne Gold-Bikin, a Pennsylvania divorce lawyer, said E-ZPass helped prove a client's husband was being unfaithful: "He claimed he was in a business meeting in Pennsylvania. And I had records to show he went to New Jersey that night.''"

I can't help thinking that American divorce lawyers have a far more interesting job than their English counterparts.
Labels: Divorce