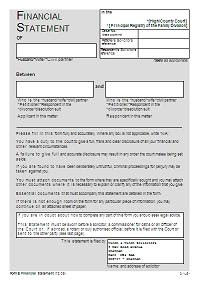 Sometimes it seems as if 50% of the job of a family law solicitor comprises filling in forms. It could be worse I suppose - that figure would be increased to 90% if you are unfortunate enough to do legal aid work.

The form for today is the infamous 'Form E Financial Statement', a 34-plus page tome that all parties to financial proceedings on divorce are required to complete, setting out full details of their financial circumstances. The form is also often used where no application has been made to the court, as a means of disclosure for the purpose of negotiating an agreed settlement.

The main problem with the form is that it is a 'one size fits all' document, to be used by millionaires and those on state benefits alike (although there has been some discussion of introducing a simplified form for straightforward cases). As a result, many sections in the form are irrelevant to parties of modest means and it can be difficult to explain more complex situations within the constraints of the form. Personally, I preferred the old system of preparing an 'affidavit of means', which could be tailored to the particular circumstances of each case. Unfortunately, that system was all too often abused by parties (and, unforgivably, their solicitors), who used the affidavit as a vehicle to raise all sorts of derogatory and irrelevant issues (I remember some 'affidavits of means' that contained nothing else - not even the basic details of that party's means). Partly as a result of such abuse, the Form E was introduced, and now we are stuck with it.

Most of the form is purely factual: valuations of assets, details of income etc. Only the last two sections of the form really involve much law, where you have to deal with such issues as each party's financial contributions to the marriage, issues of conduct (which are very rarely relevant but still often raised by parties with an axe to grind), other relevant circumstances and, most importantly, what order is being sought.

Once the form is complete you then have to check and collate the 'essential documents' that have to be attached. These can be quite voluminous and include such things as valuations, bank statements for the last 12 months, payslips, business accounts etc.

In many ways things have improved with the use of Form E, but I sometimes wonder whether the proliferation of paperwork is really necessary. Who wants to read page after page of a form filled with sections stating "not applicable", and how many bank statements actually contain anything that has a significant bearing upon the outcome of the case? One thing is for certain: the pipe-dream of the 'paperless office' is as far away as ever, if not further away.
Labels: Finance/Property