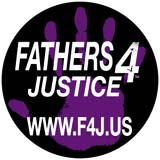 I have been looking at the web site of the American fathers' rights group Fathers-4-Justice® US (F4J™ US). The group (which is quite separate from the UK organisation of the same name) says that it was established in March 2005 in Minnesota and that it "has since steam-rolled across the country as a 100% volunteer army of Superhero mothers, fathers, grandparents and others who have answered the call to defend the millions of American families who suffer at the hands of domestic judges, attorneys, social workers and other profiteers engaged in child custody matters." (I am not sure how much American social workers are paid, but if it is anything like the amount social workers receive in this country then the word 'profiteers' is somewhat inappropriate - I could say the same for legal aid lawyers.) The F4J US mission statement says that its members are "dedicated to fighting for truth, justice and the American way (sorry, couldn't resist) equality in America’s family law system", and its grievances seem to be remarkably similar to those of fathers' rights groups in this country.

This set me thinking about fathers' rights groups generally:

[I am open to suggestions for further options.]
Labels: Children