And some people want this? 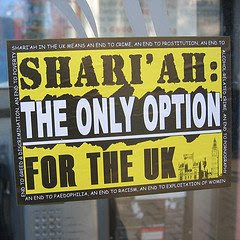 Here is an appalling story from Yemen. An eight year old girl was forced by her father to marry a 30-year-old man. After suffering violence and sexual abuse from her "husband" for two months, she managed to escape and went to a court, where she has filed a complaint against her father. Meanwhile, her "husband" has been imprisoned without charge, but "expressed no remorse, saying he was only practising his “right” as a “husband”".

The blogger (from Sudan) who reported this story goes on:

There can be no denying that much of the ills women face in our societies can be blamed on Islam. While whether or not the prophet married a 9-year-old is debated amongst Muslims, subsequent scholars throughout the centuries have justified marrying off young girls.

Arab and Muslim countries have made progress in the past few years by raising the age limit for marriage, however, according to Sharia, a father is allowed to give away his pre-pubescent girl in marriage, without her consent - provided he believes her ‘husband’ to be a pious, reliable man.

I find it very difficult to see how this kind of thinking can be reconciled with human rights laws or any modern western legal system.

[Update: The marriage has now been annulled.]
Labels: Human Rights