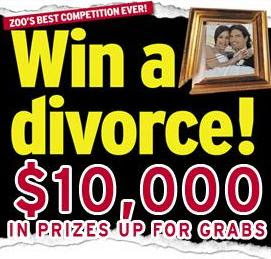 Stuck in a busted marriage? Then we've got the answers to your prayers...

So says Australian 'lads' mag' Zoo Weekly, as it introduces 'its best competition ever'. The prize? An 'actual divorce' (whatever that is), including solicitors' fee of up to $5000, a plasma TV (in case she grabs the one you've got), a PS3 to fill the long lonely hours, a 'spectacular three-tiered divorce cake', a divorce party with ZOO girls and, best of all, a cleaner for two months.

So, what do you have to do to win such an 'awesome prize package'? All you have to do is tell the magazine why you want a divorce, in 100 words or less. As they say: "if you're trapped in a loveless marriage or you've just found out the missus has been rooting your best mate, then this is the chance you've been waiting for."

When asked if the competition could be viewed as encouraging divorce, the magazine's editor was unrepentant: "You'd have to be pretty nutty to enter a competition to win a divorce if you're happily married", he said. Quite.

Zoo Weekly is apparently no stranger to running controversial competitions. Last year it offered readers a chance to win their girlfriends a 'boob job', by sending in shots of her cleavage.
Labels: Divorce