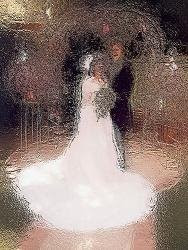 I rather liked this picture, which I found on a Creative Commons Search yesterday. I had intended to attach it to the previous post, but I think it deserves a post of its own. It is by Donna62, and is (I think) a real photo from her wedding, which she has 'dissolved', to symbolise her divorce. It is one of what she calls "a tongue in cheek series", each one more dissolved as the divorce goes through (this one is 50%). She says: "Why in the world did they ever decide to use the word "dissolution" instead of divorce? I keep thinking of the Wicked Witch of the West saying "I'm melting!" No, you're dissolving. Sugar dissolves in water." Typical I suppose of a lawyer, but I had never thought of that before.
Labels: Divorce