Twitter as a serious tool? You're having a laugh... 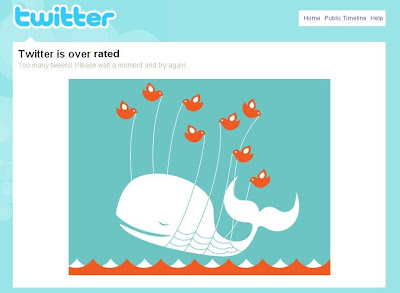 When I joined Twitter I was told that it would be a wonderful business tool that I should not be without - a mantra that I have often seen repeated since. Now some months (and 1,900 tweets) later, I can't honestly say that Twitter has lived up to the hype. At least not as a business tool.

I have, however, enjoyed Twitter as a place of amusement. Highlights have included the surreal evening when @Charonqc invaded France, conversing with a gorilla and a pretend divorce for a pretend marriage. If you don't already tweet (and if you think your sanity can stand it), then have a go at Twitter. Just don't expect to get much work done.
Labels: Twitter