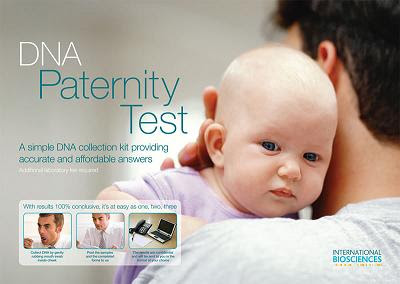 The other day The Telegraph carried a story about over-the-counter DNA paternity testing kits that will shortly be available in chemists. The kits will cost £30 and will contain swabs to take samples, which are then posted to the testing company, International Biosciences, who will carry out DNA tests on them for an additional fee of £119. Even without any maternal involvement the test: "Establishes the paternal link between an alleged father and a child" and is "100% conclusive for exclusion and greater than 99% for inclusion."

Obviously, the tests raise a number of moral issues, not least for children who might be rejected as a result of a negative result. As to legal issues, the tests will not be admissible in court proceedings, although in view of their claimed accuracy this may be an academic point, so long as the samples were taken correctly. Clearly, family lawyers are likely to come across these kits (and their results) in their future work. Further, I'm not sure that it would be unethical for a lawyer with a client who doubts whether he is the father of a child to suggest that the client use one of the kits, in an effort to determine the issue without the expense of court proceedings.
Labels: Children