Keep Your Mumbo-Jumbo to Yourself 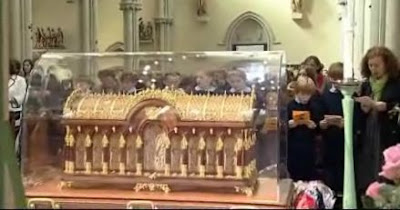 I had to check it wasn't April Fools' Day. The news that the "relics" (read: bits of thigh and foot bones) of "St Thérèse of Lisieux" (read: a nineteenth-century French nun) had arrived in Britain in 2009 for a month-long tour just had to be a spoof, surely? Sadly, it appears not - there are still sufficient numbers of people so deluded as to actually believe this nonsense. As Matthew Parris in The Times today points out, an event like this is a reminder to all right-thinking people not to legitimise mumbo-jumbo with undeserved respect.

Don't get me wrong, if you want to believe in mumbo-jumbo then that is your right. What you are not entitled to do, however, is try to force your version of mumbo jumbo upon others. Take, for instance, this article that appeared in the Guardian's Comment is free column yesterday. It seems that last week the Jewish Agency for Israel and Israel Journey released a video advertisement which likened Jews who married outside of the religion to missing persons. Now, I'm no expert on the arcane intricacies of the Jewish faith (and I have far better things to do with my three-score years and ten than to study them), but prejudice is still prejudice no matter what the excuse. This particular piece of mumbo-jumbo prejudice came to light (and the perpetrators have been forced to back down), but how many insidious instances must there be every day of parents/relatives/'friends'/church/community/etcetera pressurising people not to marry someone who does not belong to the same mumbo-jumbo group?
Labels: Marriage Reason