Now, I'm no criminal lawyer (not for a very long time, at least), so please bear this in mind while reading this post. I have, however, dealt with many cases involving domestic violence. The worst cases were, of course, those ones where the perpetrator was the sort of character for whom the possibility of a term (or another term) in prison meant nothing, and certainly acted as no deterrent. Such characters have no regard whatsoever for any form of authority and may remain a danger to the client for many years to come. 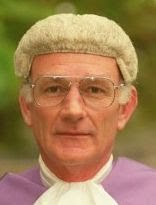 Such, it seems, was the case with Michael Curry, who came before Exeter Crown Court recently. Curry, who has a record for assaulting previous partners, pleaded guilty to ABH on his latest partner, an attack that apparently included punching her, stamping on her and attempting to strangle her. Judge Graham Cottle was advised by a probation officer "that it was likely that [Curry] would again resort to violence when released". Mindful of this, Cottle sentenced him to four years in prison and thereafter five years on licence, a sentence which would have protected Curry's partner(s) for a considerable time. Unfortunately, however, Judge Cottle had exceeded his powers, because the total sentence could not exceed the maximum for ABH, which was five years. He therefore reduced the sentence to three and a half years prison plus one year on licence. Clearly frustrated, Judge Cottle criticised the sentencing laws which, he said, were not consistent with his public duty to protect women (or, presumably, male victims of domestic violence).

Now, this all seems somewhat ironic in a time when we are regularly being told how the Government is getting tough on crime, particularly violent crime. However, that is not the point of this post. I am more concerned with the victims than the perpetrators. OK, so the maximum sentence for ABH is five years in prison. Let us say that that is a suitable maximum for such an offence. At the end of the prison term, however, shouldn't the victim be given some form of protection? After all, the offender of course has no right to harass or assault his former victim, and so a licence would not in any way impinge upon his liberty. Or am I talking nonsense, just an amateur dabbling in criminal matters?
Labels: Domestic Violence