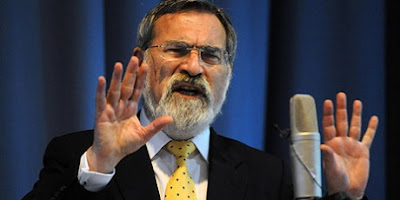 Further to my last post I read today that Dawkins is being blamed for falling birth rates across Europe! This would be laughable, but for the fact that our government has recently seen fit to elevate the author of this nonsense, Chief Rabbi Jonathan Sacks, to a position in the upper house of this country's Parliament. His argument appears to be that secularism equals selfishness and immorality. This is an old, tired, and completely wrong proposition that is regularly wheeled out by theists and has long-since been proved utterly fallacious. Dawkins himself dealt with it in The God Delusion, a book that Sacks appears to have either not read, or not understood. It is truly scary that someone who thinks that all morality flows from belief in mystical sky-gods occupies a position in the government of this country. (And I'm not even going to deal with the fact that he thinks a falling birth rate is a bad thing...)
Labels: Reason