When there are divorce proceedings pending or likely to be filed shortly, all financial/property matters are usually dealt with under the ancillary relief jurisdiction. Indeed, any application under any other jurisdiction will normally be consolidated with the ancillary relief proceedings. However, in Smith v Smith the husband successfully obtained an order for sale under s.14 of the Trusts of Land and Appointment of Trustees Act 1996 ('TOLATA'), despite the fact that a contested divorce hearing was due in less than two months. The wife appealed the order, but her appeal has been dismissed by the Court of Appeal.

So, why was it appropriate for the sale of the house to be dealt with under TOLATA here? The answer is that the wife was defending the divorce, and had already thereby delayed any grant of a decree (and therefore any ancillary relief application) by more than six months. Meanwhile, the husband was having to continue to fund the outgoings on the property, in particular servicing a mortgage of £7 million. Lord Justice Wilson:

"I am clear that, confronted with an application under TOLATA between separated spouses, the court should embark upon the discretionary exercise by asking itself whether the issue raised by the application can reasonably be left to be resolved within an application for ancillary relief following divorce. It is in principle much more desirable that an issue, as here, about sale of the home should be resolved within an application for ancillary relief. For there the court will undertake a holistic examination of all aspects of the parties' finances, needs, contributions etc; will devise the fairest set of arrangements for the future housing and finances of each of them; and, to that end, will provide for the transfer of capital, as well perhaps as for payment of future income, from one to the other. By an order under TOLATA, on the other hand, the court lays down only one piece of the jigsaw, namely that the home be sold, without its being able to survey the whole picture by laying down the others. So at this threshold stage of the enquiry into an application under TOLATA between spouses the court will, in particular, have regard to the question whether, within a time-frame tolerable in all the circumstances, the parties will become able to apply for ancillary relief ... In my view the husband's application under TOLATA crossed the threshold stage of the enquiry."

It was also argued that, by finding that the purpose for which the home had been acquired, namely as a home in which the parties might live together, was a purpose which could no longer be achieved, the recorder impermissibly pre-empted the hearing of the divorce suit. This was dealt with realistically, by the lower court finding that, in the circumstances, "such was a purpose which retention of the home could never again serve", even in the unlikely event of the court finding that the marriage had not irretrievably broken down. 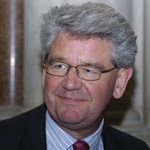 On the subject of divorce, Lord Justice Wilson (left) had a swipe at Parliament: "Our society in England and Wales now urgently demands a second attempt by Parliament, better than in the ill-fated Part II of the Act of 1996, to reform the five ancient bases of divorce; meanwhile, in default, the courts have set the unreasonableness of the behaviour required to secure the success of a petition on the second basis, namely pursuant to s.1(2)(b) of the Act of 1973, even when defended, at an increasingly low level." Perhaps something for the next government to consider?
Labels: Finance/Property Law Reports