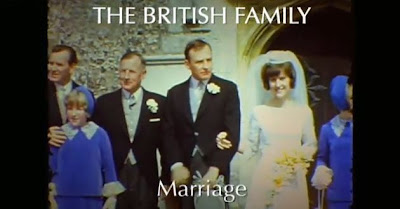 Further to this post, I have now watched the first episode of The British Family. The theme of this programme (in a series of 4) was marriage, at least marriage from the second world war until the passing of the Divorce Reform Act 1969, more of which later. It was a period of incredible change.

The programme begins by telling us how the war had "torn through the fabric of family life", with the result that there were almost 30,000 divorces in 1946, nearly five times the pre-war figures. Quaintly, the Government responded by putting out radio broadcasts on the BBC urging people to "keep calm and carry on", whatever that meant.

Another response, says the programme, came from the National Marriage Guidance Council (now Relate), which, says presenter Kirsty Young, wanted marriage to "stop being an institution and start being a relationship". (The programme appears to suggest that the Council was formed in 1946, but it was actually founded before the war.) Young has a fascinating, though brief, interview with Joy Ross, one of the Council's untrained volunteers, who tells us that often her first task with couples that came to her was persuading them that they were not failures. "We all have marriage problems", she told them, "even marriage guidance counsellors".

It appears, we are told, that the efforts to preserve marriage were having an effect, as the divorce rates steadied in the late 1950s. This did not last, however, as the divorce rate doubled between 1960 and 1969, despite the legal hurdles then in the way of anyone wanting to dissolve their marriage. We are told of the lengths that people were prepared to go to in order to untie the knot, including pretending to commit adultery so that private detectives could obtain evidence of, for example, a husband being found in bed with another woman. 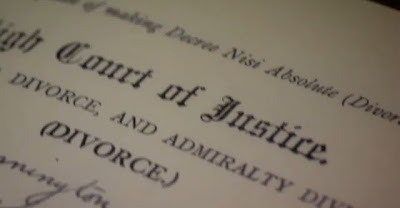 Eventually, says Young, the law caught up with society and the Divorce Reform Act 1969 was passed, allowing separation as a 'ground' for divorce. Contrary to what I said in my previous post, the programme does explain that two years' separation is required, or five years, if the other party does not consent. What the programme does not tell us, however, is the way in which, since the passing of the Act, unreasonable behaviour has been 'abused' by many with extremely weak allegations against their spouses, effectively doing away with the requirement for two years separation, in many cases.

The Act, of course, opened the floodgates for divorce and another interviewee, Claire Rayner, recalls how people lamented to her how many marriages were now breaking down. She pointed out to them, however, that the idea that because divorce rates used to be very low that meant that everyone was happily married was simply not true. "What they were, she says, "was miserable, but stuck with it - they could do nothing about it." This seems to me to summarise the period perfectly.

You can still watch the programme on iPlayer, here.
Labels: Divorce Marriage