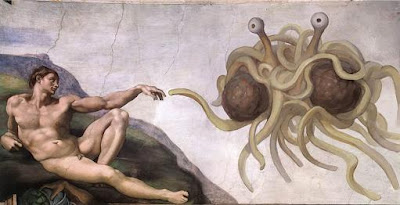 I was overjoyed to see that the first state-funded Hindu school has now formally opened, to go alongside all the other faith delusion schools that the taxpayer is paying for. Quite why in the twenty-first century we should have to sponsor places whose primary aim is to perpetuate their own particular version of mumbo-jumbo nonsense (and thereby preserve artificial divisions in society) is completely beyond me. Unfortunately recent governments, short of rational people, have favoured these establishments (for pecuniary reasons?) and there seems little prospect of us moving to a modern, secular education system in the foreseeable future.

Accordingly, I am off to set up the Church of the Flying Spaghetti Monster School, so that I can claim my share of the education budget...
Labels: Children Reason