Coinciding with the news that sham marriages are on the rise (the Telegraph attributes this to the Law Lords throwing out tough Home Office rules to prevent them because of human rights, in July 2008), the BBC ran a piece yesterday looking into how an illegal immigrant may go about obtaining a sham marriage in order to remain in the UK. It didn't take their undercover reporter long to find out...

The BBC also interviewed Mark Rimmer, the superintendent registrar for the London Borough of Brent, regarding sham marriages. He said that if the parties have the right paperwork then he has to marry them. However, whilst filming a Pakistani man and a Lithuanian woman come in. She can't speak English and he can't speak Lithuanian. Unsurprisingly, this raises suspicion and, sure enough, the 'groom' heads for the exit alone, rather than face questioning: 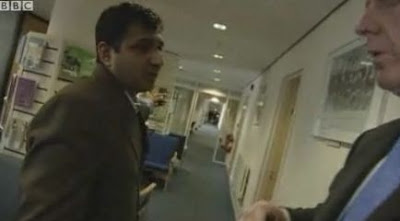 We don't call them 'alimony arrearages' over here, we call them 'maintenance arrears'. Whatever, eighty year-old Joe Iannicelli from Georgia, USA, refused to pay them on principle. Joe was actually divorced no less than thirty-eight years ago, and the arrears now amount to some $68,000. He claims that his ex-wife voided the contract for alimony when she "abandoned" their two sons, then 15 and 16, in the 1970s. Unsurprisingly, this argument did not cut any ice with the judge, who committed Joe to prison for contempt.

Social networking in general, and Facebook in particular, has been blamed for an increasing number of marital breakdowns. However, there is another issue here, one that has been picked up by Daniel Clement at the New York Divorce Report. As he says, the advent of social networking has made breaking up harder to do - now, couples routinely exchange passwords to email or online accounts (both social and financial) which can obviously lead to serious problems upon relationship breakdown. Clearly, at the very least, lawyers should now advise their clients to change all passwords. 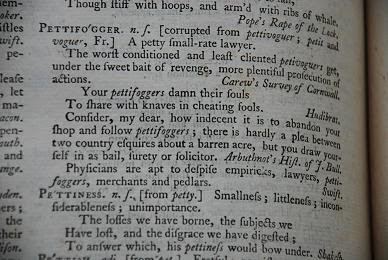 Finally, congratulations to Maryland divorce lawyer James J Gross for getting the word 'pettifogger' into one of his letters, something I sadly never achieved in my career. I'm not sure whether James is aware of the alternative definition of "a petty small rate lawyer" (see above). Whatever, he is now looking for the chance to use the word 'flibbertigibbet'...
Labels: Divorce Finance/Property Legal Profession Marriage