DIY Divorce: Do away with the lawyers? 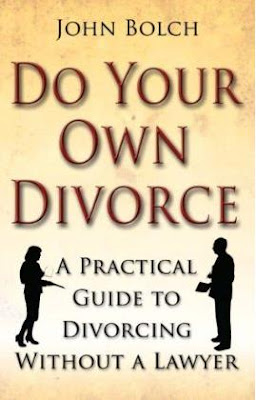 I posted the other day about divorce reform, putting the case for no-fault divorce. How about no-lawyer divorce?

My book Do Your Own Divorce is based on the proposition that it is possible for a reasonably competent person to deal with their own divorce, within the framework of the present divorce system. However, as I point out in the book, there are limits to what a party should attempt without a lawyer, but should it be like this? In fact, should lawyers (and, come to that, courts) be involved in divorce at all?

The idea for this post came from a read of the Terms of Reference for the upcoming Family Justice Review. The review will not, of course, cover reform of divorce law. However, it has been specifically charged with examining options for introducing more inquisitorial elements into the family justice system, and whether there are areas of family work which could be dealt with more simply and effectively via an administrative, rather than court-based process.

I can certainly see the scope for doing away with the current adversarial system and replacing it with an inquisitorial system. Many other countries have inquistorial systems, after all. However, that does not do away with the lawyers, or the courts.

An administrative process could, though.

What form would such a process take? I don't think that it is difficult to imagine a purely administrative process to deal with the divorce itself, but what about sorting out the financial/property settlement and arrangements for children?

I don't see a problem where matters are capable of agreement: the parties would agree terms in out-of-court mediation and any agreement could be recorded by a central agency (although there may be argument over the wording of the agreement). The problem, of course, comes where an agreement is not possible: the matter has to be decided somehow.

With regard to financial/property matters, the only answer that I can see is a formulaic approach: all settlements are reached by reference to a formula. That could certainly do away with the need for courts (and lawyers to argue matters), but could we come up with a formula that would achieve a reasonably fair result in all cases? Possibly.

With regard to children, it is more difficult: you can't sacrifice the welfare of a child to the whims of a rigid formula. Frankly, my stream of ideas that this post represents runs dry at this point - I can't see a way to bring recalcitrant parents in line without courts, although no doubt there are others out there who can (I would be very interested to hear from you).

There is, of course, one last point: even if an administrative settlement is possible, what if one party refuses to comply with it? How can compliance be enforced without the use of courts, and those awful lawyers?
Labels: Children Divorce Finance/Property Legal Profession