Who cares about Cheryl Cole? 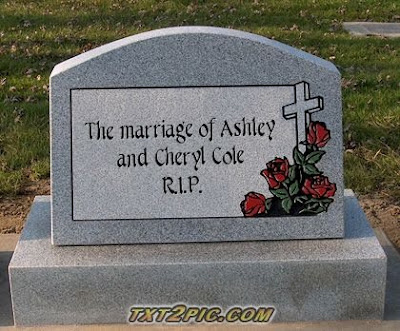 It is obviously a national tragedy. Wherever one looks in the media today (Google lists 2,069 news articles as at the time of writing) one is greeted with the not unexpected but still distressing news that the "nation's sweetheart" has decided to jettison her hubby, Cashley Cole.

As we all mourn at the altar of celebrity, our thoughts turn to the unhappy couple: he a poor footballist earning a mere £6.2 million for kicking a leather ball around a field and she an even poorer ersatz pop star who reportedly earned £1.2 million for sitting as a judge on that cringeworthy annual celebration of mediocrity, The X Factor. How will each manage without the other?

Clearly, there is nothing worse happening in the world than this appalling catastrophe - let us just hope that there will be another natural disaster somewhere, so that we can turn our minds to lighter things.
Labels: Divorce