The Industry of Divorce

"This commercialisation of divorce is unedifying in the extreme." So said Liz Jones, in an article in The Mail yesterday, after visiting the Starting Over Show.

In the four years that I've been writing this blog, 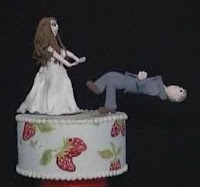 I've regularly pointed fun at the industry that has recently been growing up around divorce: divorce cakes, divorce parties, even coffins in which to place your wedding ring, to name but a few ideas that enterprising entrepreneurs have come up with to ease the pain of marital breakdown. Jones, however, found much more at the Show, including a hypnotherapist, spiritual healers, a stand offering teeth-whitening, Botox and wrinkle filling, 'flirting workshops' and even the 'Ball of Hopes and Dreams', where punters are invited to write down their 'positive vision for the future' on a piece of paper, stick it to a helium-filled balloon, then make a wish and let go. Jones describes the Show as "a curious mixture of the hard sell and the nauseatingly touchy-feely". "Make us feel loved, and special, and cared-for in a cocoon of squashy bean bags", she says, "and we will be less likely to be wary of being ripped off. I find the whole approach cynical".

But is any of this any less cynical than divorce lawyers trying to make a profit from people in a vulnerable situation? It seems from the increasing numbers of people going in for the sort of things that Jones describes that they do get something from it. Sure, spiritual healing may not be for all (it would certainly not be for me), but if it makes people feel better, where's the harm?

I suppose it depends upon just what advice is being given, and just what product is being sold. Unpalatable though it is to some, a bit of good legal advice is, I would suggest, a necessary evil when one is faced with the legal consequences of separation or divorce. A bit of emotional counselling would also not go amiss for anyone in need of it. However, is the line of exploitation crossed with some of the other items on offer? For example, Jones make the point that expensive beauty makeovers could actually just be sending out the message that women are responsible for the failure of their relationships because they were not beautiful enough to hold onto their man. On the other hand, if they make women feel better about themselves, then surely that is a good thing?

Before any clever commenter makes the point, as someone who has made a career from the industry of divorce and has even written a book on the subject, I am not perhaps the best person to comment upon all of this. I shall therefore leave it to the reader to make up their own mind.
Labels: Divorce