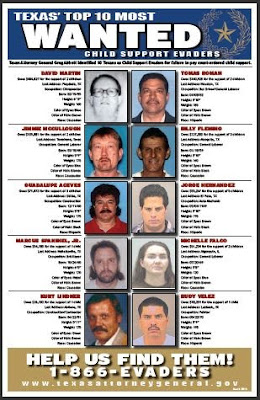 I've commented previously about the way the authorities in at least some parts of America name parents who fail to pay child support. In Texas, the Attorney General is actually obliged by law to release an annual Top Ten List of Texas’ Most Wanted Child Support Evaders. This year's named and shamed owe a staggering combined $1.1 million in overdue child support, ranging from number ten who owes a mere $18,351 to number one, who owes an eye-watering $404,827.

Attorney General Greg Abbott is quoted as saying: “Parents have a moral and legal obligation to support their children. Those who ignore their court-ordered child support obligations must be held accountable for violating the law. We urge Texans to help us locate parents who are wanted by authorities for failing to pay their child support.”

The Top Ten list is just the tip of the iceberg. The Office of the Attorney General is required to publicly identify all child support evaders who owe more than $5,000, provided certain condtions are met, such as that an arrest warrant must have been issued, no payments made in the previous 6 months, and the custodial parent must sign a confidentiality waiver allowing certain case information to be made public. The Attorney General's website tells us that the 'Evader program' is "very successful" and, as proof, points us to a page listing evaders who have been arrested or located.

Should we have such a system over here?
Labels: Child Support