For the second morning running I've not found any family law news worthy of inclusion in the news section of Family Lore Focus. That is not to say, however, that there is no family law-related news about...

Perhaps most importantly, the Mirror tells us in an exclusive the news we all feared most: 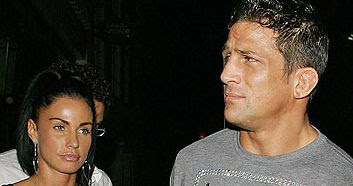 Apparently, their problems are exacerbated by her constantly referring to him as 'Pete' in bed. I think there are more revelations in the Mirror report, but I lost the will to live before I got to the end. Still, looks like good news for those who bet on the marriage not lasting...

Meanwhile, another celebrity marriage has hit problems before the nuptials have even been entered into. Described as "the fairytale wedding between a Pakistani cricket legend and one of India’s biggest tennis stars", the marriage of Shoaib Malik and Sania Mirza was "hailed last week as a triumph of love and sport over the political chasm that has divided India and Pakistan for 63 years". However, there is one small problem: another woman claims that Malik has overlooked the fact that he is married to her. Still, I suppose a telephone wedding is not very memorable...

Back on these shores the divorce of Michelle and Scott Young continues its bizarre course, evidenced by this headline in the Mail today:

We are informed that in 2006 Mrs Young was told by her husband to "go to Davies Street in Mayfair and wait outside the Toni & Guy hairdressing salon", where an aide to billionaire oligarch Boris Berezovsky would give her £10,000 towards her living expenses. She did so, and sure enough a man drove up in a Porsche and handed her an envelope stuffed with banknotes. I'm really looking forward to finding out what the court makes of all this...

Finally, I shall miss reading The Times' website when it goes pay-per-view in June. I shall not, however, miss any further contributions by guest contributor Melanie McDonagh. In a column today she discusses the decision in the Vaughan case this week, then launches into a right-wing religio-fundamentalist tirade against many of the advances that have been made in family law over the last hundred years. Here are a couple of examples of her wisdom:
And:
With there still being dinosaurs around who think like this, it is no wonder that our divorce law is taking so long to evolve into something fit for the 21st-century.