Straw backs down over appointment of Wall 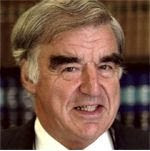 This whole fiasco seems to me to demonstrate a fault in the new appointment system. As he did not veto the appointment, Straw will not now have to explain his reasons for opposing Wall, but whatever they were he would be criticised for politicising the appointment, as Family Law Newswatch states. This would make it difficult for any appointment to be vetoed, which makes the right to veto fairly pointless.

Anyway, leaving that aside, the good news is that we have the first choice candidate for our next President. There are huge challenges ahead for the family justice system, and I wish him well.
Labels: Legal Profession