Love is... robbing a bank to pay your boyfriend's child support. Allegedly. 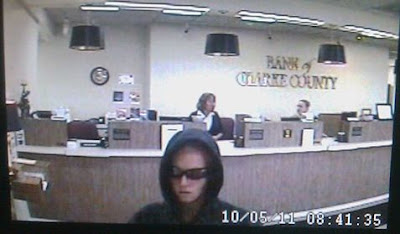 What could be a greater act of love than to rob a bank to pay your other half's child support arrears? That is what police in Virginia say happened on Tuesday when they arrested a 20-year-old woman following a bank robbery. They say that using information they found at the scene of the robbery they notified the Shenandoah County Sheriff’s Office that the suspect could be on her way to their County. The suspect then appeared at the Shenandoah County Court Offices with a large amount of cash in her possession, seeking to pay her boyfriend's child support arrears. Unsurprisingly, she was arrested.

Moral of the story: If you rob a bank (allegedly), a court is probably not the best place to go to with the loot.
Labels: Child Support