They want him Here, There and Everywhere 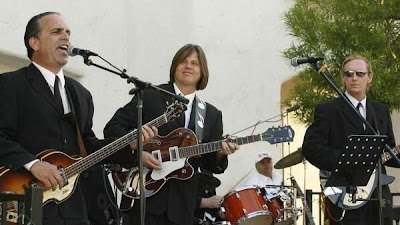 According to his ex-wife, Ted Felicetti has been on the run since 1999 for non-payment of child support, which now totals $40,000. She says that he has taken up residence in about nine different states in the last eleven years. Each time the authorities located him (he was tracked down in Oregon, Pennsylvania, New York and California), he would move to another state before they could arrest him. On one occasion he was found working in San Diego and a deduction from earnings order was made, but he left the job before any money was collected.

Well, now he has been arrested, albeit in connection with a different matter. In addition to owing child support in Tennessee, Felicetti was wanted by San Diego police for failure to appear in court in connection with driving under the influence charges. They had been trying to find him for over a year. The breakthrough came when they found out that he was performing as part of a Beatles tribute band (he plays Paul McCartney, although I can't see the likeness myself). They located the band's Facebook page and discovered that the band was due to perform on Fox 5 Morning News. After performing "I am the Walrus" he was arrested, and subsequently jailed on $130,000 bail.

Moral of the story: If you are wanted by the police, it is probably not a good idea to appear on TV, and publicise the fact on Facebook.
Labels: Child Support