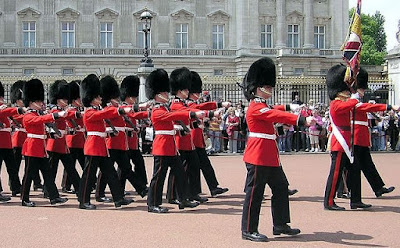 Yesterday was Armed Forces Day. I know all about Armed Forces Day, as the first one took place in Chatham last year, and I was living right in the middle of it. In fact, HMS Let's Kick the Shit Out of Johnny Foreigner sailed right past my window.

Do they have a point? Is it all too easy to be impressed by our military and its hardware, like some bunch of overgrown schoolboys, and miss the subliminal message of jingoism? Certainly, the Iraq war was unpopular and in serious need of public support. As for the war in Afghanistan, support is surely likely to drain in inverse proportion to the growing death-toll. That toll might be just a little more bearable for the families of the deceased if there were some discernible progress, but there is not: to this inexpert eye the most likely scenario when we leave that unhappy country is that our 'enemies' will quickly regain control of those areas that we took from them, resulting in nothing whatsoever being achieved.

And what of the civilians who actually have to live in the war-zone? How many of them have lost their lives as a result of our presence in their country? I hope that our military personnel do all they can to minimise civilian casualties, but reading of soldiers at some remote location in America merrily releasing bombs from UAVs flying over Pakistan as if it were some Playstation game does make one wonder. Those exciting-looking toys that are displayed each Armed Forces Day do kill real people. The campaigners behind Unarmed Forces Day spent yesterday in "counter-recruitment activity and informing soldiers of their legal right to object to war", and today set off on a five-day 'Peace Walk' from the Ministry of Defence to the military prison in Colchester where soldier Joe Glenton is in prison for refusing to fight in Afghanistan. Lance Corporal Glenton is quoted as saying: "When I went to Afghanistan I was proud to serve the Army and to serve my country, but before long I realised the government was using the Army for its own ends. It is distressing to disobey orders, but when Britain follows America in continuing to wage war against one of the world’s poorest countries I feel I have no choice. Politicians have abused the trust of the Army and the soldiers who serve." Hmm, what happens if all soldiers refuse to fight? Peace, I guess ...or is that just naive?

None of this may have any relevance to family law, but it most certainly has relevance to families. Quite what it must be like for all the parents, spouses, partners, children and siblings of those in the war-zone, constantly hoping that they do not receive that terrible news from the Ministry of Defence, I can't begin to imagine.
Labels: Miscellaneous