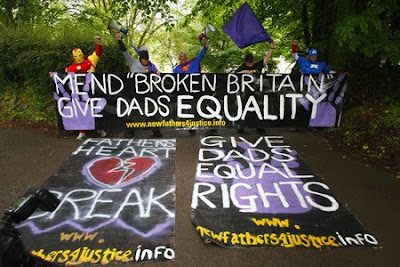 Following my last post I have received this email from fathers' rights group New Fathers 4 Justice:


Every day we hear from disgruntled dads who are becoming more millitant with the lack of contact with their children and support from the new coalition government.

Daily distressed fathers contact us in desperation about the abuse they are suffering in hands of the family court system.

In the 21st century fathers deserve equality when it comes to child contact and nothing less will suffice.

It is only a matter of time before angry fathers climb rooftops,Courts,bridges and landmarks again.

We would rather be spending time with our children but feel we have no other option.

David Cameron could open the Family Courts up tomorrow if he wants but instead remains silent on this issue. He even ousted Shadow Justice Secretary Herny Bellingham MP from this post after the election, the man who he asked to organise a review of the Family Court system.

See you at Djanolgy house on the 12th??"

Pink Tape has already given her own take on the activities of fathers' rights groups. I suspect that she, too, may be receiving an email...
Labels: Children