On a day when there is, as yet, no family law news upon which I am inspired to blog, I thought I would write my second World Cup Report.

Whilst the goings-on on the pitch may be less than enthralling, it seems that there is plenty of entertainment to be had in the crowd, and I am not just referring to the mindless vuvuzelas (more of which later).

The Guardian reported yesterday Another triumph for Fifa's chillingly efficient rights protection team, proving the fact that is obvious to all: that the World Cup is about money, not football. Thirty-six women wearing orange dresses available from the leading Dutch beer brand Bavaria (although bearing no logo) were apparently ejected from the Holland v Denmark game by a Fifa official, despite having tickets for the match, which were kindly supplied to them by ITV pundit and one-time mediocre footballer Robbie Earle. They were subsequently taken to a "facility", where they were questioned by the authorities. Quite how Fifa distinguish between women wearing orange dresses and the hordes of orange-clad Holland supporters is not entirely clear, but may be explained by this quote by Marina Hyde, who wrote the article:

"Sepp Blatter & Co's priorities have always tended toward the skewed. When racist chanting rained down on England players during a 2004 friendly against Spain in Madrid, Fifa imposed a risible £44,750 fine on the Spanish FA. In that same year, Cameroon wore an unauthorised kit at the African Cup of Nations – an offence for which Fifa saw fit to fine the Cameroonian FA £86,000."

Clearly, Fifa are working for the best interests of the beautiful lucre game.

Meanwhile, last night the amateurs from

North Korea almost held the over-paid prima donnas of Brazil to an unlikely draw. The real interest, however, was the one small group of apparent North Korean fans in the crowd, just enough to fill a TV screen. They seemed genuinely North Korean: all in identical uniforms, all dutifully cheering on the unhappy land of the Great Leader, in perfect unison. However, things were not quite as they seemed. The Independent reports today that: "The regime in Pyongyang – unwilling to let its citizens leave the fatherland lest they abscond – recruited Chinese nationals to travel to South Africa to pretend to support its players". Perhaps there is a lesson there for the British Government: in the unlikely event of England qualifying for the next World Cup they should send a bunch of Scotsmen to cheer the team, to avoid the national embarrassment of English hooligans shaming this sceptred isle.

And so to the vuvuzela. If you want to watch the match on TV, but retain sufficient rationality to want to avoid being driven insane by the dulcet monotone of this witless instrument (let alone the asinine commentary), you can always mute the volume. But you may still wonder just how long you could withstand the noise before delirium sets in. Well, now you can find out. The vuvuzela game allows you to test your sanity (and your eardrums) to the limit of willpower, and records the result. I managed ten seconds, before having to call for a straitjacket. 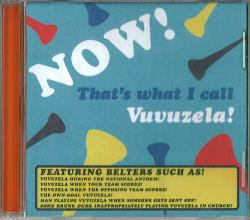 And if you have already been driven insane by the vuvuzela then you can continue to enjoy it long after the last ball has been kicked, by investing in the CD Now That's What I Call Vuvuzela!, which includes such staples as Vuvuzela when your team scores!, Vuvuzela when the opposing team scores! and Man playing vuvuzela when someone gets sent off!. I've already ordered my copy...

With that, I'm off to rest in a darkened room. If I recover, I may write some family law later.
Labels: Totally Off Topic