I have received the following press release: 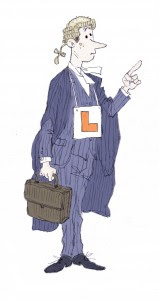 BabyBarista is a fictional account of a junior barrister practising at the English Bar, and previously appeared on The Times website. Tim Kevan, author of BabyBarista, decided to stop working with The Times after they announced plans for their online paywall. Tim’s blog will now be published on the new law section on guardian.co.uk and on his own web site at babybarista.com.

Janine Gibson, Editor, Guardian.co.uk, said: "This is a great example of how we are pioneering digital innovation and openness, working both commercially and editorially with the online community through our Open Platform, rather than shutting them out. This is just the first step towards working in new ways with talented writers, bloggers and creators.”

Tim Kevan said: “Not only does the Guardian have what I consider to be the most vibrant and innovative online presence of any of the national newspapers but also what is now the very best law section, freely available to all. I’m particularly impressed by the way they have introduced the idea of partnering with bloggers such as myself, allowing me to retain my own website and identity. It’s a paradigm-shift away from the old-school need for ownership and exclusivity and is definitely the way forward for traditional media to harness the power and energy of the web’s creative forces.”

[Although not in the original press release, I have taken the opportunity to include another of the excellent cartoons drawn for BabyB by Alex Williams. I hope that neither he nor Tim minds!]
Labels: Press Releases