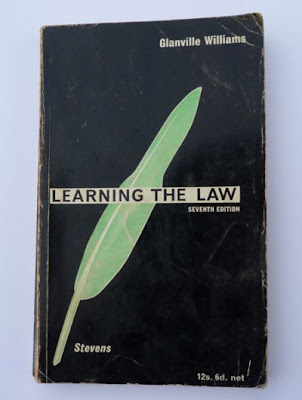 Final clearance of my late father's house is now taking place. In the loft we found many of his old legal textbooks. Unfortunately, lack of available space means that they have to go. I have, however, awarded a stay of execution to one small tome, a slightly tatty copy of a book I recognised from my own time as a law student. Learning the Law by the late Professor Glanville Williams will be recognised by many lawyers as the book that introduced them to their legal studies. As can be seen from the image above, my father had the seventh edition, published in 1963, which he purchased second-hand from Wildy & Sons.

Glanville Williams: Learning the Law is still in print, with the 14th edition having just been published, now authored by Professor Tony Smith. I have not read a recent edition, but I suspect that it may have been thoroughly re-written since 1963, when Glanville Williams began his section on solicitors thus:

"The life of a successful solicitor is not so exacting as that of his opposite number at the Bar; the solicitor has his clerks and junior partners to do some of the work for him. He misses the camaraderie of the Circuit Mess and the exhilaration of forensic battle in the exalted courts, but his work is generally more varied than the barrister's, and offers closer contact with the life of the ordinary man."
Labels: Legal Profession