I thought it was about time I resumed my quest for the greatest divorce lawyer advertising ideas, so here is one from an Austrian advertising agency (I don't know whether it was ever used): 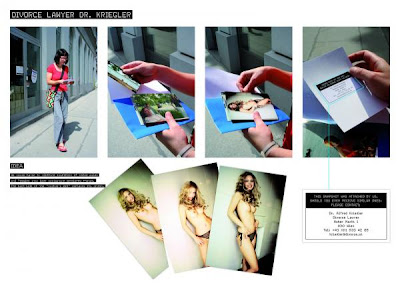 To explain, the idea of the advert is stated thus: "We cause havoc by slipping snapshots of nakek [sic] males and females into bags containing developed photos. The back-side of the "cuckoo's egg" explains its origin". The "cuckoo's egg" is effectively a divorce lawyer's business card that says (something like): 'This snapshot was attached by us. Should you ever receive similar ones, please contact [name and address of lawyer]'. Sounds like an excellent idea to me.

Whilst trawling the web for this post I came across a particularly gross advert featuring a divorce lawyer, but actually advertising a South African charity. If you're at all squeamish, look away now:

In case you can't make it out, the card reads: "In Bob's previous life he secured multi-million rand divorce settlements. Looks like you're still bleeding 'em dry 'ey Bob? Do something good in this life. www.charitysa.co.za." Nice to see that we divorce lawyers are held in similar high regard in South Africa...
Labels: Legal Profession