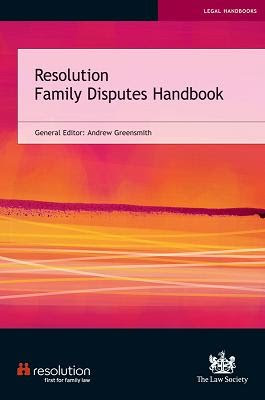 £59.95 – Published by Law Society Publishing: July 2010
The Resolution Family Disputes Handbook sets out to provide ‘an authoritative guide to offering non-court based solutions’ to family disputes. Written by Resolution’s ADR committee, it comprises 16 chapters (not the 19 stated on The Law Society’s website), covering the various alternatives to court (primarily mediation and collaborative law), and a number of related issues.

What does such a handbook comprise? Before reading it, I certainly didn’t know, and in case the reader does not either I shall begin this review by detailing its contents:

Chapter 1 – Unresolved conflict: A brief chapter discussing the nature of family conflict, and its effects.

Chapter 2 – Principles and values: A discussion of the philosophy behind ADR.

Chapter 4 – Mediation: Covers the principles and procedure of mediation.

Chapter 6 – Developing the mediation model: An exploration of different models of mediation.

Chapter 8 – Funding: How mediation and collaborative law may be funded.

Chapter 9 – Start-up: Looks at the arrangements for preparing for and conducting the first mediation session, and for starting out on the collaborative law process. Practical, although a little basic in parts (e.g. advising mediators to smile when they greet the parties!).

Chapter 10 – Disclosure: A short chapter dealing with the issue of disclosure, as it relates to the mediation and collaborative processes.

Chapter 11 – Closure: A practical look at the closure stage of the ADR process, both from a legal and an emotional perspective.

Chapter 12 – Prenuptial and postnuptial agreements: Suddenly, some case law, followed by using the collaborative process to prepare such agreements.

Chapter 14 – Privilege: The law on privilege, as it relates to ADR.

Chapter 16 – What next? A look at the future, where ADR may no longer be ‘alternative’, but mainstream.

Appendices – Including a ‘top 10 tips for mediators and collaborative practitioners’, a list of further reading, a list of resources on the Resolution website (including precedents) and the text of a talk ‘Visions of excellence’, given by mediation pioneer Henry Brown to the Resolution ADR conference in 2006.

I am not a mediator or collaborative lawyer, but it appears to me that this book covers every topic that a handbook on family ADR should do. Certainly, I cannot think of any obvious omissions and, if anything, it could be said to go beyond the required scope, for example when it discusses the case law on pre- and post- nuptial agreements.

I must mention the language used throughout (most) of the book. One might have hoped that relatively new subjects such as mediation and collaborative law would be couched in modern plain English, escaping the excess jargon that plagues so much of our law. Alas, this is not the case. Take, for example, the following single sentence that would not look out of place in an obscure statutory instrument:

“But if every separating couple with outstanding issues about children and finance lies at a unique point on the continuum between emotional/relationship transformation and commercial bargain, between therapeutic/facilitative and law-based resolution, is not the optimum model for family ADR one where the specialist mediator becomes the manager of a discrete process in which the lawyers are always potentially contributing actively, in a unique model that draws on the best of not only the civil and family mediation processes but also CFL, all of which might prove inadequate on their own?”

Clearly, there is an enthusiasm for the subject (that I have come across previously in mediators and collaborative lawyers), but this can lead to such over-exuberances as comparing mediation to jazz (!) and describing two of its qualities as ‘genius and art’.

On the subject of (over) enthusiasm, there were one or two instances in the book where I felt that the writers perhaps promise too much from the particular ADR process that they are discussing, for example stating that collaborative law clients “are already each better off” than they would be if they went down the court route. Would this not depend upon how successful the process is? Still, I suspect that the likely reader of this book will also be passionate about ADR, and will not therefore object to the odd overstatement.

Which brings me to my last point: who exactly is this book intended for? Obviously, for those involved in ADR (calling itself a ‘guide to best practice’ suggests this) but it also provides an excellent introduction for those contemplating offering a family ADR service. Despite my reservations mentioned above, the book has taught me a great deal about the subject, not to mention a number of items that are useful to any family lawyer.
Labels: Book Reviews Collaborative Law Mediation