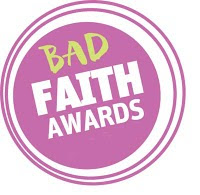 This year's New Humanist Bad Faith Award for 'the most egregious contributions to irrationalism and superstition during the course of this year' presents some tough choices, even though last year's winner Pope Benedict XVI is not present.

As a family lawyer I almost voted for Sheikh Maulana Abu Sayeed, who, as the New Humanist 'bookie' states, helped shore up the case for the opposition to Sharia tribunals providing arbitration in the UK by saying that: "Clearly there cannot be any ‘rape’ within the marriage. Maybe ‘aggression’, maybe ‘indecent activity’." I was also tempted by Baroness Warsi, who has scarily told us that the coalition 'does God'. However, in the end I voted for Hojatoleslam Kazem Sedighi, whose linking of adultery to earthquakes takes faith-based insanity to a whole new level.

Be sure to cast your vote!
Labels: Reason