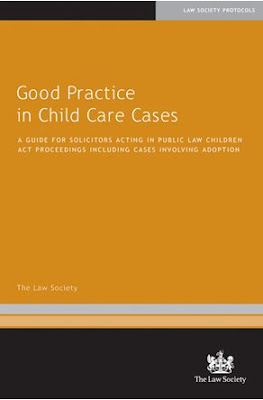 £34.95 – Published by Law Society Publishing: November 2010
Good Practice in Child Care Cases was first published in 2004, and was intended to provide guidance for solicitors acting in public law Children Act proceedings, both in terms of the conduct of cases and the particular approach required. I suspect that in the intervening years many a copy has permanently accompanied such solicitors, both in the office and at court.

Of course, much has changed in the field of child care guidance since the first edition of Good Practice was published. In particular, the Public Law Outline (‘PLO’) was introduced in 2008 (and has already been updated), and the best practice guide was published by the Ministry of Justice's Care Proceedings Programme in 2009. In fact, there is now a plethora of good practice guidance, coming from numerous sources. It could be said that what is required is a ‘guide to the guidance’, and that is at least partially where the second edition of Good Practice comes in.

The book is made up of six chapters (or 'parts') comprising 73 pages, and fifteen appendices comprising 112 pages. The first two parts deal with general principles and common issues that need to be considered by all solicitors, irrespective of which party they are acting for. Parts 3 to 5 deal with particular matters when acting for the local authority, the child or the parents. The final part covers good practice in relation to other aspects of public law children cases, including secure accommodation and adoption.

The appendices comprise guidance relevant to solicitors acting in public law proceedings, including the PLO, the best practice guide and the Law Society’s Acting in the absence of a children’s guardian Practice Note, together with older material from the first edition. The final appendix is a list of useful contacts and websites (in addition to this, there are numerous links to online materials throughout the text of Parts 1 to 6).

Good Practice is certainly a guide to all of the good practice guidance out there (thereby fulfilling a useful function in itself), but it also contains much ‘good practice’ of its own. If I have to be critical, some of this is pretty obvious stuff (“the client should be encouraged if possible to bring to the first meeting all documentation in their possession”), but that is really just nit-picking. The book is also far more than just ‘good practice’, often including the law (or references to the law) behind the particular area of guidance.

To be honest, reviewing Good Practice is a fairly pointless endeavour. Simply having all of this information in one extremely handy volume makes the purchase (at a very reasonable price) obviously worthwhile even if (as is likely to be the case) the practitioner already has most of the information (certainly the appendices) elsewhere. But this is not just a textbook; it is also a readable guide, particularly for those new to the subject. Even for the more seasoned practitioner, it fulfils the stated role as a (very) useful aide mémoire.