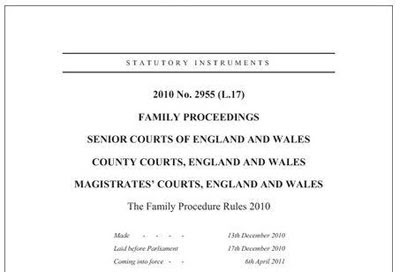 Hat-tip to Pink Tape for pointing out that the new Family Procedure Rules have been published.

I shall not attempt to explain or analyse the new rules (I am sure that others far more learned than I will do that), but here is a brief summary:

3. The rules adopt a similar structure to the Civil Procedure Rules 1998.

6. 'Parts 15 and 16 contain rules relating to representation of protected parties and children respectively'.

7. Parts 17 to 19 contain miscellaneous provisions, such as statements of truth (Part 17).

8. Parts 20 to 36 'are of general application and contain procedural provisions
mirroring, with modifications for family proceedings, the general procedural parts of the Civil Procedure Rules 1998', including rules about disclosure (Part 21), rules about evidence (Parts 22 to 24), experts (Part 25), hearings (Part 27), costs (Part 28), appeals (Part 30) and enforcement (Part 33).