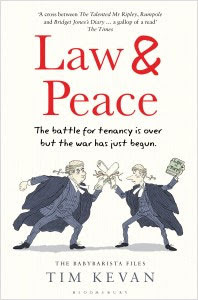 £11.99 - Published by Bloomsbury: 3rd May 2011
Law & Peace is the sequel to Tim's first BabyBarista novel Law & Disorder, which I reviewed (under its original title BabyBarista and The Art of War), here.

At the end of Law and Disorder our hero had managed, by hook or (more likely) by crook, to secure a precious tenancy. Law and Peace takes up the story as BabyBarista begins his first year practising on his own account. His past is not entirely behind him, however, with the continuing worry of the huge debts that his mother ran up to get him through Oxford, and the continuing threat of dire retribution from his arch-enemy, TopFirst.

A possible solution to the debt problem presents itself when SlipperySlope, that fine example of the other side of the profession, makes BabyB an offer he can't refuse. Needless to say, this involves BabyB getting mixed up in all sorts of skullduggery and shenanigans, as every means at his disposal are used to win an important case involving the 'Moldies', a delightful cast of ASBO-attracting geriatrics.

And who is on the other side of the Moldy litigation? Why, TopFirst of course, and for him it's personal. To add spice to the rivalry, the two of them enter into a wager as to who will be the first to get a coveted 'red bag', awarded to a junior barrister by a leader in their case if they do a particularly good job, with the loser having to act for the winner as a mini-pupil (read: dogsbody), for a week.

As with Law and Disorder, what follows is a romp through the all the dark corners of the legal profession: we have a judge with a fetish for 'ladies in particular attire', barristers who will stop at nothing to further their career and solicitors who employ various dubious persons to obtain the evidence needed to win the case. All of our favourite characters from the first book are there, together with one or two new ones, such as Smutton, a glamorous partner in SlipperySlope's firm whose every word drips with innuendo, much to BabyB's embarrassment.

On the subject of favourite characters, BabyB is once again guided through his adventure by the wise and gentle hand of OldRuin, who provides sage advice and assistance, both in respect of BabyB's professional and his personal life.

But, as with the first book, Law and Peace is not just a story. The narrative is liberally interspersed with amusing anecdotes and interludes, in particular describing the, ahem, camaraderie and friendly banter between fellow members of the Bar. There are even some moments when characters dare to contemplate that there may be more to life than the ruthless struggle up the ladder to the top of the profession.