Divorce? I'm all for it. 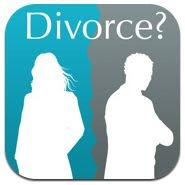 As reported by The Guardian today, a new divorce app is now on sale. Divorce? "delivers great legal advice and guidance for people in England and Wales who are contemplating divorce", according to its description on iTunes. Divorce? has been developed by Peter Martin, head of the family department at OGR Stock Denton, and HG Apps Store, and is available for £9.99.

It has, however, caused some controversy, according to The Guardian. For example, Anastasia de Waal, deputy director and director of family and education at the thinktank Civitas, questioned whether "casual technology" would trivialise divorce. Not having seen it, I can't comment upon this app, but as a generalisation I think we have to get used to the fact that, casual or not, apps are just another method of delivering information to the public, and I'm all for that.
Labels: Divorce