Book Review: Family Courts without a Lawyer - A Handbook for Litigants in Person 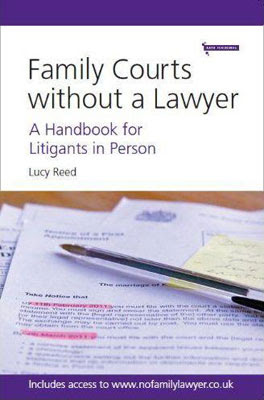 The book is certainly very timely, coming as it does as the proposed virtual abolition of legal aid for private law family matters threatens to flood our courts with litigants in person.

The book is also very ambitious. There have, of course, previously been litigant in person guides to divorce (including my own Do Your Own Divorce), but I don't recall previously coming across a guide to all areas of (private law) family court work.

Save for the introduction, the book is divided into seven parts, as follows:

1. Understanding the system, including chapters on the courts, lawyers, where to find the law and a 'reality check' chapter which, inter alia, dispels many of the myths surrounding family law.

2. Putting it into practice, including what to expect at court, general procedure, evidence and a chapter on running your case.

3. Divorce, separation and finances, comprising the law and procedure on these areas, including a chapter on finances for separating cohabitees.

4. Children - comprising the law and procedure in matters concerning children, including chapters on child abduction and, interestingly, children cases for non-parents.

5. Domestic violence and abuse - the law and procedure in this area.

6. After judgment - including enforcement, costs and appeals.

7. Lastly, a section entitled 'Toolkit and resources', i.e. appendices, including a fairly comprehensive glossary, a list of internet resources, a table of cases (something I have recently found missing in professional handbooks, and did not expect to find in a book aimed at litigants in person), precedent forms and templates and extracts from rules and statutes.

As is becoming increasingly obligatory, the book also comes with an accompanying website, nofamilylawyer.co.uk. The site is currently available to non-purchasers, although this may change (the book comes with its own unique access code). There is currently not a lot of content on the site, but it does include downloadable versions of the precedents in the book, and will, in due course, include updates.

One small point on the price of the book: nearly thirty pounds may not seem much to professionals used to paying much more for specialist texts, but I wonder whether it may seem a little high to the average litigant in person, particularly those of limited means, and especially if only one section (such as the one on children) was of interest to them. I do notice that the book is already slightly cheaper on Amazon (excluding postage), and no doubt the price will reduce further. However, it would be a great pity if potential purchasers were put off.

One other small criticism that has nothing directly to do with the contents of the book: I found the font size a little small and the layout at times a touch confusing, making it a little difficult, for example, to see where one item ended and another began. Obviously, this is a very subjective point, and others may disagree.

Moving on to the contents of the book, the biggest thing that struck me is the level of respect with which Lucy treats her reader (I am not, for one moment, suggesting that litigants in person should not be respected). She is not afraid to regularly refer to primary sources such as statute and case law, in a fashion similar to texts aimed at professionals, and expects these to be read, with the help of her guidance. Obviously, this is the best way to 'arm' a litigant in person with the full picture, but it is also fraught with the danger that the reader will be biting off more than they can chew. I suppose this may be a result of the amount of ground that the book covers - to spoon-feed the reader with 'everything' would result in a tome a lot longer than the already considerable 336 pages. Whether Lucy is successful in this 'gamble' only time will tell, but good luck to her for her brave decision.

Lucy writes the book in her usual easy-going style, with use of the odd colloquialism such as 'telly' or 'divvy', and the odd piece of humour, such as referring to the ex's lawyer as "that shark that my wife has hired" (Lucy actually suggests that this is not a good idea). She also openly adopts the convention of alternating the sex of judges (sometimes referring to them as 'him', sometimes as 'her'), which this old dinosaur found a little confusing.

As to the substance of the book, I could criticise by saying that some sections are a little thin on detail, that some points that I consider to be important are omitted, that some information is repeated in more than one section, or that some sections are a little oddly ordered. However, all of this would be nit-picking. The book is a treasure trove of very useful information and, often, extremely good practical advice, for example the sections on applying for contact and on children's wishes and feelings.

I asked at the outset whether Lucy had succeeded in her aim of helping litigants in person. The answer must be a resounding 'yes'. This book is certainly not a panacea, but armed with it the litigant in person is surely going to be better prepared for the ordeal ahead. In fact, I would go further: I think the book could well be used as an introductory text for the aspiring family lawyer.