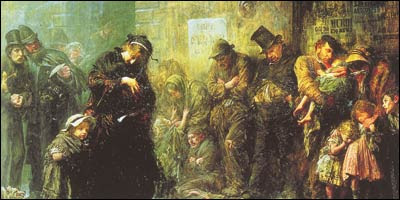 Firstly, and most importantly, the Gazette reports that: "Family lawyers have attacked the government’s plans to deny legal aid to domestic violence victims who accept ‘undertakings’ from an allegedly abusive partner". As the report says, this is likely to lead to more contested hearings, which obviously does not exactly sit well with the government’s stated intention to resolve more cases through mediation. Another example of 'un-joined-up thinking', it seems.

Elsewhere, Roger Smith relates the unsurprising news that the English were mute at the International Legal Aid Group conference in Helsinki in June. He says that in previous years the English have been big players at these meetings, with plenty to say, but: "Alas, we have joined our predecessors, the Americans, as countries that once led the world on legal aid developments. There is little chance of spinning the current cuts as anything other than a slashing of entitlement to the poor and powerless." Quite.

On a somewhat lighter note, Obiter reports that a certain @JonDjanogly who has been posting on Twitter is not, in fact, our beloved justice minister, but an imposter. This is a shame, as some of his tweets were quite fun, for example: 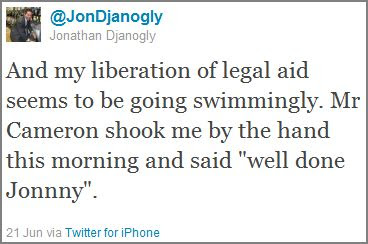 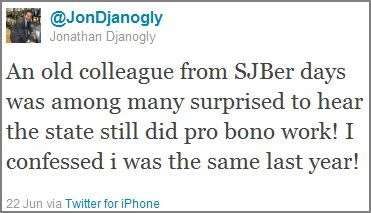 I suppose it just goes to show that you can't believe everything you read on Twitter...

Finally, there is the letter from Martin Comport of Dale & Dale, which I mention for a completely different view of the legal aid debate. He says:

"I have read how the Law Society is continuing its fight against legal aid cuts. I do not recall the Society asking whether they should spend money on a campaign with which I may not agree."

He says that his fee paying clients have to take a commercial decision whether or not to litigate and wonders "whether such a consideration is taken when granting a legal aid certificate". "Perhaps", he says, "the legal aid budget would not have increased had a more stringent financial test been considered and hence such proposed cuts would not now be proposed". I shall leave it to the reader to form their own view on this...
Labels: Legal Aid