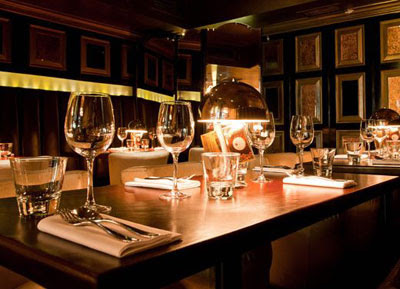 Edgar Venal does not normally employ counsel, as their fees inevitably reduce the amount he can justify charging clients. However, for those really big cases when one has to impress the judge he instructs Quentin Pompous-Arse QC. Quentin may not be the sharpest knife in the box, but judges always fall for his aristocratic accent. Edgar and Quentin go way back, both being former Bullingdon members.

Normally when Edgar and Quentin meet they do so at Boodle's gentlemen's club in Pall Mall. However, they felt that today the club might be a little too full of anxious members hoping their names are not mentioned when MPs question the Murdochs. Accordingly, Quentin has chosen somewhere a little off the beaten track: the Crazy Bear Thai restaurant in Fitzrovia, where he is also a member.

It is not just a social meeting. Quentin is concerned that some of the tactics he has used to dig the dirt on opposing parties may also fall under public scrutiny.

"You do realise old boy," he said, pushing his Khao phat poo around his plate, "that compared with what we've been up to, phone hacking is small fry?"

"Well, quite." Replied Edgar, tucking in to his Phat kraphao.

"You don't seem at all concerned." Quentin was rapidly losing his appetite.

"Why should I be?" Asked Edgar.

"Why? Because if the media get wind of what we've been doing, then we'll be crucified."

"The media? Who's going to trust them now?"

Quentin thought about that for a moment. "All right," he said, " but what about the Government?"

"The Government? Who's going to trust them now?"

"Well, what about the police?"

"The police? Who's going to trust them now?"

"Ah, I see." Replied Quentin, a wave of relief crossing his face.

"Now," said Edgar, "I fancy a dessert. How about Sangkhaya fak thong?"
Labels: Venal and Grabbit