Venal & Grabbit announce advertising deal with News of the World 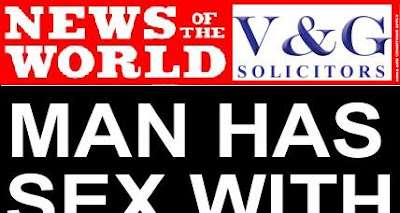 Venal & Grabbit have announced an advertising deal with the News of the World newspaper.

Senior Partner Edgar Venal said: "We got it really cheap, and there will be no other adverts competing for attention. I realise that our usual calibre of client does not normally read the News of the World, but we are aiming for the wealthy-footballer-who-has-strayed-from-their-wife market. We believe that their intellect puts them into the News of the World readership, and their money is as good as anyone's."

* * * * *
UPDATE: Readers may now be aware that this Sunday's edition of the News of the World will be the last. Edgar Venal was, of course, aware of this when he struck the deal - he expects that more copies of the paper will be sold and kept for posterity including, of course, the adverts. It is also the case that there will be no advertising in the paper, and that advertising space will be donated to charities and good causes. As Edgar Venal says: "What could be a better cause than a deserving divorce lawyer?"
Labels: Venal and Grabbit