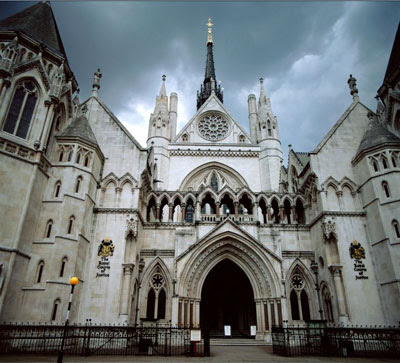 Quentin Pompous-Arse QC was making his way back to his chambers at 1 Crooked Orifice Row, after a most agreeable afternoon with his mistress (since setting her up in her Mayfair apartment he made sure that all-day hearings were settled in the morning at all costs, save, of course, when he was instructed by Edgar Venal).

His reverie was interrupted when he spotted his former chambers colleague Sir Tarquin D'Tenerife approaching him from the opposite direction. Quentin had not spoken to Sir Tarquin since Sir Tarquin had been appointed to the High Court bench. It had always been Quentin's ambition to become a High Court judge, but he knew it would never happen - even those buffoons at the Judicial Appointments Commission were not so stupid as to appoint him. But they did appoint Sir Tarquin, and that would always stick in Quentin's craw. Just because Sir Tarquin had won record divorce payouts for his clients...

Quentin quickly crossed the street, hoping that Sir Tarquin hadn't spotted him. Unfortunately, he was just too late.

"Quentin, old boy!" Called Sir Tarquin, over a crowd of bemused Chinese tourists. "How's life treating you down at the coal face?"

Quentin felt the blood rising up the bloated features of his face. "Oh, not too shabbily." He replied through gritted teeth.

"I've not seen you around old boy - where've you been?" Asked Sir Tarquin.

Avoiding you thought Quentin. "Oh, I've been about - muddling along, doncha know." He answered breezily.

"I'm sure you have, old boy. I, on the other hand, have been... " Sir Tarquin then treated Quentin to a lengthy and detailed description of his life on the family bench. The longer he droned on, the more Quentin's irritation grew.

Eventually, Quentin could take no more. "How's your good lady wife?" He blurted out, knowing that Sir Tarquin was in the middle of an acrimonious divorce.

Sir Tarquin stopped in his tracks, and turned a shade of green.

Seeing that he had hit a raw nerve, Quentin decided he would stir things up. "I hear she's going to go to the press." He said, straining to keep a straight face.

"Yes, she's going to tell them everything, apparently." Continued Quentin.

Sir Tarquin was now incandescent with rage. "Excuse me old boy," he said, turning on his heels, "but I've got to get back to my court."