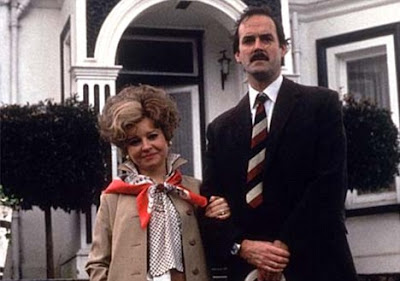 Reading the first paragraph of DJ* Glover's article on the effect of the legal aid cuts on the courts in the Law Society Gazette this morning I was reminded of a famous Basil Fawlty quote. He (DJ Glover, that is) begins:

"The House of Commons’ justice committee, chaired by Sir Alan Beith MP, predicts an increasing number of litigants in person by reason of the government’s curtailment of legal aid."


The quote, if you haven't already guessed it, is: "Next contestant, Mrs. Sybil Fawlty from Torquay. Specialist subject - the bleeding obvious."

The article goes on to say how these clever politicians have told the courts that they must make ‘adjustments’ to cope with this influx, and examines the likely impact of the proposed legal aid ‘reforms’ on family litigation in the county courts. Here are a couple of tasters:

"The commentary on the legal aid cuts has had the usual talking heads pirouetting about the usual platitudes. None of them face up to the fact that the virtual elimination of publicly funded professionals from family cases in the county court threatens its collapse under the weight of misplaced expectations."

"Family cases will take up more, perhaps much more, of a finite amount of judicial time. This will result in longer delays and increase the difficulties for other litigants in person whose passage through the court will be further extenuated."


Excellent stuff, and well worth a read.

(*I refer to him as 'DJ', as I used to appear before him - somehow, 'Peter' doesn't seem appropriately respectful!)