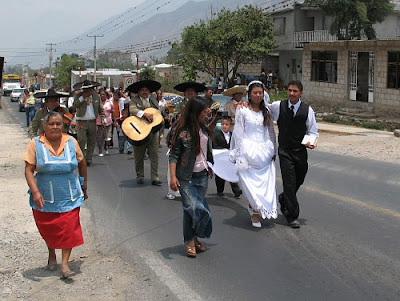 The BBC reported yesterday that:

"Couples in Mexico City could soon use "renewable" marriage contracts to try living with their other half before making a lifetime commitment.

Newlyweds would take a minimum of two years before deciding whether to cement their relationship or split up, under plans to alter the city's civil code.

If approved, the contracts would set out in advance marital duties, such as in childcare, schooling and budgeting."

The idea of the contracts is to cut divorce rates, but they have attracted criticism for contributing to a "throwaway culture" in respect of society's institutions, and for putting children through the anguish of wondering whether their parents would stay together.

As to the second point, it would of course depend upon the length of the contract - most children would surely be too young to worry during the first two years of their parents' marriage. Subject to that, though, the point does seem valid.

Otherwise, the contracts would presumably be prepared by lawyers, in the same way as prenuptial agreements are. If so, they would surely be a bonanza for family lawyers, creating a vast amount of work where there was little, and involving the couples in substantial legal costs. Somewhat ironic, given that one of the purposes of the contracts is to reduce family court workload, and therefore legal expense.

The last, and perhaps biggest, objection I would have to such contracts is this: apart from the couples effectively having prenuptial agreements, what difference would they make? If a marriage is going to break down, it's going to break down. All the contract will do is create uncertainty where otherwise there would be none.
Labels: Marriage