Why do lawyers hyperventilate? 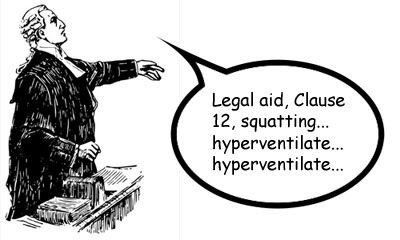 You see it all the time - in the general media, in blogs, on Twitter: lawyers getting irate about something, whether it be legal aid, Clause 12, squatting or whatever. It's usually something that's going to happen, which will (apparently) have a terrible adverse effect upon lawyers some poor unfortunates who (whether they realise it or not) need lawyers to protect them.

One feature of such hyperventilations is particularly noticeable: the lawyers are so sure of themselves. But then, we should not be surprised at this: who knew a lawyer who wasn't sure of him/herself?

And they don't even seem to take a break. Last Saturday evening as I was enjoying a glass (or two) of Tempranillo I noticed that they were still doing it on Twitter, whilst others were settling down to watch Dr Who (not myself - I grew out of Dr Who when I was about ten). In a Michael Winner moment I told them to calm down, although I don't think they were listening.

And yet, despite their anger, little seems to change when the horrendous things of which they so bitterly complain come to pass - the Earth still rotates on its axis, Jeremy Kyle still appears on daytime TV and people still smirk at Ed Balls's surname.

So, why do lawyers hyperventilate?

I should say at this point that I don't generally hyperventilate, at least not about legal matters. Whether this is because I'm now of an age when I take a more relaxed attitude to life's little bothers, or because I simply don't give a s**t any more, I will leave to others to say.

It could, of course, be that many of these lawyers are jumping on one of the current 'hyperventilation bandwagons', intent on having some of the glory of a successful cause (or even a glorious failure) reflect back upon them. But that would be a cynical thing to suggest, wouldn't it?

On the other hand, perhaps they really do care. I know, the idea of lawyers caring about anything other than their fees may take some readers a bit of getting used to, but it does happen. Perhaps, therefore, we should put our irritation to one side and accept that lawyers really can be as altruistic as others, even if their self-righteousness can sometimes grate even more than those Michael Winner commercials.
Labels: Legal Profession