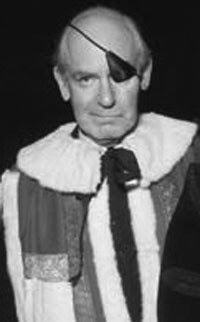 I was toying with the idea recently of doing a series of posts on past Presidents of the Family Division. I wasn't sure whether I would go ahead with the posts, but whilst doing some initial research I realised what a remarkable life Lord Simon of Glaisdale had, so I decided to write a post about him, even if I don't do the others.

Lord Simon was not actually the President of the Family Division, but rather the last President of the old Probate, Divorce and Admiralty Division ("Wills, Wives and Wrecks"), before the Family Division was created in 1971. He was appointed to the position in 1962, and therefore oversaw the great changes in divorce law of the 1960s, in particular the Divorce Reform Act 1969, which allowed separation as a basis of divorce without proving fault, and which led to a huge surge in the number of divorces.

Born Jocelyn Edward Salis Simon in 1911 and known as 'Jack Simon', he was educated at Gresham's School, in Holt, Norfolk and went on to read English at Trinity Hall, Cambridge. In 1934 he was called to the Bar by the Middle Temple, where he was a Blackstone Prizeman, and joined the chambers of a certain Tom Denning, practising mainly in family and trust law.

His promising career was soon interrupted by the Second World War. He was commissioned in the Royal Tank Regiment, commanding the Special Service Squadron of the Royal Armoured Corps when it landed in Madagascar in 1942. After his tank was knocked out and his dismounted troops ran out of ammunition, they became prisoners of the French for 24 hours during which, as he liked to recall, they ate their best meal since the war began and his troops experienced a situation unique since the Napoleonic War. In 1944 he fought in the Burma campaign and ended the war as a lieutenant-colonel.

On his return to the Bar in 1946, Simon re-established his practice, frequently acting as junior to Seymour Karminski KC, head of his chambers and a leader of the Divorce Bar. When Karminski was promoted to the Bench in 1951, Simon himself took silk.

His career then took on a quite different and unexpected path. In the lead up to the 1951 general election which returned Winston Churchill to power, he was offered the Conservative Party candidacy for the seat of Middlesbrough West, which was then held by the Labour Party. He ran a successful campaign and was elected by a narrow majority. He would hold the seat for 11 years, increasing his majority in both of the subsequent general elections.

Despite continuing his legal practice, Simon's political career took off. He was almost immediately appointed Parliamentary Private Secretary to the Attorney-General, and in 1957 he was appointed Joint Parliamentary Under-Secretary of State at the Home Office. The following year he was promoted to Financial Secretary at the Treasury, succeeding Enoch Powell, and in 1959 he became Solicitor-General, a job which brought with it a knighthood.

His career then took another turn when in 1962, to widespread surprise, he turned his back on a possible position in the Cabinet by resigning from his office and his seat in Parliament and accepting the appointment as President of the Probate, Divorce and Admiralty Division, the last law officer to be offered the post of the head of a judicial division. According to his obituary in The Independent, written by then President Sir Mark Potter:

"As President, he was an instant success. Patient and meticulous, he was a pleasure to appear before and his judgments, elegant and learned, a pleasure to read. Despite his firm belief in the sanctity of marriage and his strong opposition to divorce by consent, he was humane and progressive in his application of the law."

Not all thought him to be progressive, though. For example, in 1965 he supported a scheme to prohibit divorce for couples with children under 16, saying that the sums released by reducing the divorce rate could be spent on education and marriage guidance. Labour MP Leo Abse described the proposals as "extraordinarily naive", and seeming to come "out of another century".

At about this time Simon was diagnosed with a benign tumour in his neck. The removal of the tumour caused paralysis to one side of his face, the loss of sight in one eye, and a slight slurring of his speech. After this, he often wore a black eye-patch, which some commentators rather obviously said gave him a "somewhat piratical air".

He continued as President until 1971, when he was promoted to the House of Lords, where he sat as a Law Lord until he retired from judicial office in 1977. Thereafter, he continued to attend the House of Lords and took a close interest in legislation, sitting as a cross-bencher. He died in 2006.

Whilst preparing this post I have come across various anecdotes regarding Lord Simon. I couldn't include them all without making the post considerably longer than it already is, but perhaps two quotes are my favourites. Simon was an avowed feminist who thought that many divorced women, particularly those no longer young, had a rough deal from husbands who wished to move on to 'newer models'. On one occasion he asked: "Is it consonant with our ideas of justice that a husband who has enjoyed the services of his wife during her springtime and summer, should be able to cast her away in the autumn?" On another occasion he observed: "The cock can feather the nest because he does not have to spend most of his time sitting on it."