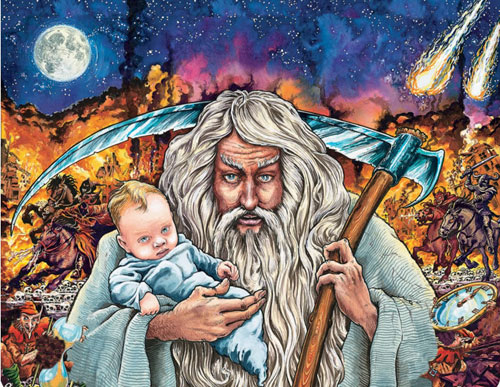 January - Fathers' rights group The Real Families Need Fathers 4 Justice carry out their most audacious protest to date, when they daub Big Ben with the words: "A farver iz 4 liff, not jest 4 contraseption".

February - The government has launched a consultation into why there are so many consultations into various aspects of family law. The closing date for the consultation is the first of April.

March - In the Budget the Government announces a 1p married tax allowance. Chancellor George Osborne says: "It was all we could afford, but we're sure it will be enough to persuade people to marry, rather than live in sin."

April - There is consternation at the High Court when the duty judge can't be found during the Easter vacation. Mr Justice Mostyn is eventually traced to a remote island in the South Pacific, where he can be contacted by carrier pidgeon.

May - The Government publishes its response to the consultation into why there are so many consultations into various aspects of family law. The response concludes that the best way forward would be to have another consultation.

June - The Government announces it will solve the debt crisis by introducing £5,000 fees for anyone wishing to apply for child support.

July - The issue of homeless families in the south-east is resolved, as the residents of London flee the capital prior to the Olympics.

August - At the Olympics there is disaster for the British Legal Aid relay team, when Ken Clarke drops the baton.

September - After further technical issues, the SRA finally admits that the Sinclair ZX81 that it bought to run the new mySRA system is not up to the task. It invests in a Commodore 64 instead.

October - The estate of the late Tarquin Farquhar-Obnoxious QC recieves payment from the LSC for some legal aid work he did in 1950. This is not believed to be a record.

November - The Government announces that it is considering banning Facebook, after the latest statistics reveal that the social networking site was not mentioned in only one divorce in the last year.

December - The Supreme Court hands down its judgment in Smith v Smith, in which it is severely critical of delays in the family justice system. The case was heard by the Supreme Court in October 2009.