Review of the Year, Part 1 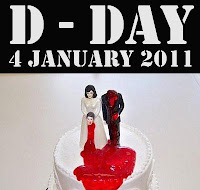 The year began just like any other, with newspapers predicting that the first day back at work would be 'Divorce Day', the busiest day of the year for divorce lawyers when, to use the words of the Telegraph, "thousands of couples decide that after yet another unfestive season, marked by rows, resentments and recriminations, it is time to call it a day on their marriages". Expect a spate of similar stories this coming January the 3rd.

Meanwhile, two important consultations were launched during the month. First we had the Law Commission's consultation on marital property agreements, which looked at reform of the law relating to pre-nuptial agreements, post-nuptial agreements and separation agreements. That was followed by the Department for Work and Pensions' Green Paper Strengthening families, promoting parental responsibility: the future of child maintenance, which set out the Government's controversial proposals for a new child maintenance system.

The month concluded with the entertaining Court of Appeal decision in Jones v Jones, which included this quote from barrister Ashley Murray:


"There are certain challenges each of us should attempt in our lifetime and for most these involve a particular jump, a mountain climb, etc. Akin to these in the legal world would be reading from first to last a judgment of Mr Justice Charles."

February
February was not a day old when the second report of the Munro Review was published. This interim report dealt with the child’s journey through the courts and care proceedings, and included the recommendation that the 'core guidance' Working Together to Safeguard Children, which had bloated to 55 times longer than it was in 1974, be reduced in size. A relief to many, I'm sure.

Later in the month the Ministry of Justice announced the news we all already knew: that as from April, "Anyone setting out to contest the terms of their separation in court will first be required to consider mediation". Perish the thought that the Government was just promoting mediation to mask its planned cuts to legal aid, as the Telegraph suggested...

On the subject of the legal aid cuts, opposition began to get more organised, with the Law Society launching its high-profile Sound Off For Justice campaign, encouraging members of the public to 'sound off', by signing up to the campaign. As I write this, it seems a total of 31,498 people have done just that. A fair number, but will it be enough?

March
March began quietly enough, with no single story dominating the headlines. Then we had the case of Re T, in which the High Court dealt with the awful scenario of a contact application by a father who had been convicted of the manslaughter of the mother. As Judge Clifford Bellamy stated, the 'proverbial man on the Clapham omnibus' may be surprised to learn that a parent who has murdered the other parent should nonetheless be entitled to make an application for contact with his child, but there is of course no presumption in law that murder would be a bar to contact.

On a lighter note, I was pleased to report on the 16th of March the marketing of my favourite memento of the forthcoming royal wedding, also known as 'The Fairytale Romantic Union Of All The Centuries'. Described as "A beautiful cup to commemorate the most beautiful occasion", this bone china mug featured "an exquisite design of the happy couple". Upon closer inspection, however, I'm not entirely clear that the makers got the right 'happy couple'.

Finally, March ended with the publication of another interim report, this time of the Family Justice Review. Amongst a host of recommendations were the establishment of a Family Justice Service and a six-month time limit for care and supervision proceedings. We would hear more of these things when the final report was published later in the year...