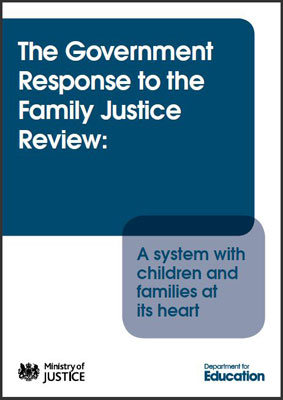 The Government has published its Response to the Family Justice Review.

The Government has accepted the majority of the Review’s recommendations, in full. Going through the detailed responses to each recommendation in the Review, I have identified the following main areas where the recommendations have been rejected, or not accepted in full:

1. The recommendation that charges to local authorities for public law applications should be removed: The Government says that the Review "did not find any evidence that court fees prevented local authorities from fulfilling their statutory duty", and that: "The cost of these fees has been built in as appropriate to the Spending Review settlements for 2010 for those departments affected."

2. The recommendation that the time limit for the completion of care and supervision proceedings should be set at six months, with a stipulation that a trial judge proposing to extend a case beyond six months would need to seek the agreement of the relevant Designated Family Judge/Family Presiding Judge, as appropriate: The Government responds: "the Panel’s proposal that extensions beyond the time limit should be agreed by a senior judge would encroach on judicial independence and may create further delay. For these reasons, the Government does not accept this part of the Panel’s recommendation, but to ensure that there is transparency about any decision to extend a case beyond the six-month time limit and that the proportion of cases requiring extensions can be kept under review, the reasons for the extension will be recorded and stated in court."

3. The recommendation that no legislation should be introduced that creates or risks creating the perception that there is a parental right to substantially shared or equal time for both parents: The Government feels that further consideration of this is needed. It says: "On careful reflection, the UK Government believes that legislation may have a role to play in supporting shared parenting and will consider legislative options for encouraging both parents to play as full a role as possible in their children’s upbringing." A working group of Ministers has been established to develop proposals for legislative change, which will be brought forward for wide debate and consultation later this year.

4. On the Review's recommendations regarding enforcement of orders: "The Government does not agree with the Review’s conclusion that additional enforcement measures are not the answer. Whilst the courts already have a number of enforcement powers (a fine or imprisonment for contempt of court; the imposition of unpaid work; and the award of compensation for financial loss suffered by the other parent) there are practical and evidential hurdles which in practice mean that these sanctions are little used. The Government therefore intends to explore the feasibility of providing the courts with wider enforcement powers so that in appropriate cases these can be used to address wilful disobedience in respect of the court’s order. Parents should also be made aware at the outset of proceedings about the potential consequences of disobeying any order made by the court and the Government believes that this could help to prevent enforcement from becoming the central issue."

5. On the recommendation that the Government should establish a separate review of financial orders to include examination of the law:  "The Law Commission is already taking forward a project to look at how provision might be made for pre-nuptial, postnuptial and separation agreements to be given legal effect, so as to provide couples with more control and certainty about how their assets are to be divided on divorce. Ministers have agreed that this project should be extended to include a limited reform on the substantive law on Financial Orders relating to needs and non-matrimonial property. The project will take around 18 months to complete. The Law Commission will then undertake a separate project to make recommendations for improving the enforcement of Financial Orders. These two projects together will improve the substantive law and make it easier to enforce Financial Orders once made by the courts." In other words, the recommendation is rejected.

As to what happens next, by April this year the Family Justice Board will be established and the legislative changes that will be required will be clarified. The Government will report on progress in implementing the wider reform programme by April 2013.