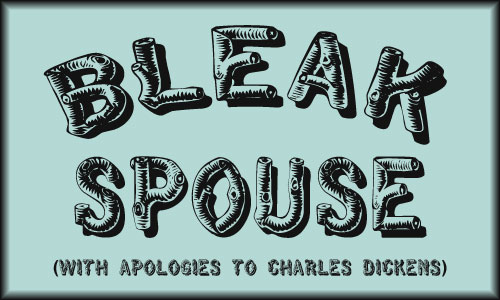 LONDON. Michaelmas Term lately begun, and the President of the Family Division Sir Nicholas Brick-Wall sitting in the Royal Courts of Justice. Implacable October weather. As many puddles in the streets as if the waters had but newly retired from the face of the earth, and it would not be wonderful to meet a train of Chelsea tractors, waddling like an elephantine lizard up Holborn Hill. Pedestrians, jostling one another’s umbrellas in a general infection of ill-temper, struggle to find their way in the fog.

The raw afternoon is rawest, and the dense fog is densest, near the Temple. And opposite the Temple, at the heart of the fog, sits the Royal Courts of Justice.

Who happen to be in the President's court this murky afternoon? Why, it is the suit of Lucrative v Lucrative, in which the wife Michelle Lucrative seeks once more to persuade the court that her former husband Scot Lucrative has salted away assets, to prevent her from receiving her just divorce settlement. She is appealing the decision of the court below, which found that he had not arranged for a banker friend to make his money "disappear", as she alleged. Her appeal, alas, is hopeless.

Lucrative v Lucrative has passed into a joke in the Family Division, having been before the court on so many occasions, over so many years. That is the only good that has ever come of it, save of course for the costs that it has earned Venal & Grabbit. The last President, Sir Mark Potty, handled it neatly when an eminent silk before him, referring to the likelihood of the Child Support Agency completing their assessment within a year, suggested that "pigs might fly". "Or Lucrative v Lucrative might settle", observed Sir Mark, to the amusement of all lawyers in court.

The present President spies the renowned Edgar Venal in his court. "Ah, I see Mr Venal is in court!" He says.

Edgar Venal slowly turns towards the President, and looks him squarely in the face with his piercing eyes. "My Lord." He says, with a slight nod.

Edgar's look is so intense that the President is slightly unnerved.

Lucrative v Lucrative drones on. The President is explaining to Mrs Lucrative that her case is hopeless, when there is a disturbance at the back of the court.

A dishevelled man has entered the room. A groan of "Not him!" goes up as he is recognised as the infamous father's rights protester Matt O'Gridley. He begins shouting a tirade of abuse, directed initially at the President.

"What about my f-ing case!" He cries. "When will I get justice?"

The President looks at him wearily, but does not reply.

Undaunted, O'Gridley continues: "I've been trying to see my kids for six years, but this corrupt and biased so-called family justice system has stopped me seeing them. Where's the bloody justice in that?"

The President again chooses to remain silent. He knows that there is no point attempting to reason with such a person.

O'Gridley then spies Edgar Venal. "Him!" He screeches, pointing at Edgar, his voice reaching falsetto levels as his temper gets the better of him. "He's the worst! He represented my vindictive ex-wife, and invented all sorts of false accusations to make sure I didn't see my kids! He's a lying bastard, that one!"

Edgar gives the President a look that says: "Get rid of this awful man." The President unconsciously finds himself compelled to comply with Edgar's wishes. He gestures towards an usher, who begins to man-handle O'Gridley out of the court.

"It's all a f-ing conspiracy, I tell you!" O'Gridley is heard saying, as he is dragged from the room.
Labels: Bleak Spouse Venal and Grabbit