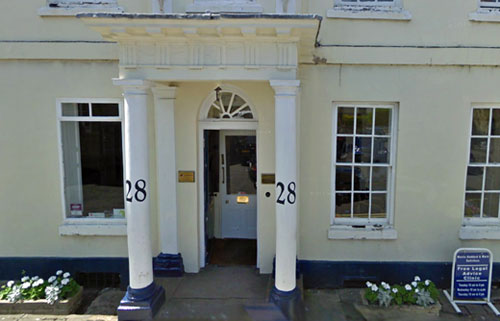 My thoughts this morning are with the as yet unnamed solicitor in Devizes who was shot in the head in his office yesterday, and apparently suffered life-threatening injuries. The solicitor has not yet been identified so far as I can establish from the reports that I have read, but he seems to work for either David Nolder and Co or Morris, Goddard and Ward, both of whom have offices at 28 St John Street, Devizes (above).

The circumstances surrounding the shooting have not yet come out, but this awful event does demonstrate that solicitors are on the front line and can become the target of angry or deranged individuals, particularly those on the other side of the dispute in which the solicitor is acting. Many family lawyers, for instance, have been attacked or threatened by the former spouse/partner of their clients.

Let us hope that the solicitor pulls through, and makes a full recovery.

UPDATE: According to this report in the Gazette, the shooting took place in the offices of Morris, Goddard and Ward, and the victim has been named as firm Principal James Ward.


FURTHER UPDATE: This is Wiltshire reports today (9th July) that Mr Ward is still in a serious but stable condition.
Labels: Legal Profession