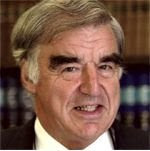 In one of the sternest judicial warnings to warring parents I have come across, Lord Justice Wall (left) quoted from Philip Larkin in the case of R (A Child), Re [2009] EWCA Civ 358 yesterday. The case involved a highly acrimonious residence application, part of a dispute between the parents that had been on-going since they separated in 2003. Judge Everall QC at Luton County Court had found that it was no longer possible for the parents and the child to work together, and so made a residence order in favour of the paternal grandparents. The mother's appeal against that order was granted but Lord Justice Wall in the Court of Appeal gave a warning to the parents of the serious harm that their actions were causing to their child. "I hope this case has given the mother a fright. I hope it has also given the father a fright." He said. "They have come within a whisker of losing their child." In a postscript to his judgment he then quoted from Larkin's poem This Be The Verse:

They fuck you up, your mum and dad.

They may not mean to, but they do.

They fill you with the faults they had

And add some extra, just for you.

These four lines, he said, "seem to me to give a clear warning to parents who, post separation, continue to fight the battles of the past, and show each other no respect."

Let us hope that more parents heed the warning.
Labels: From the Archives